Giving you unforgettable holidays in Vietnam with local experience based on selection of best hotels and resorts in Vietnam, Cambodia, Laos and Myanmar. Take a look at list of top-rated and top-quality hotels along with pictures of room type, amenities and services. Check in to get our Best rates, Best Offers and Best Services now... Park Hyatt Siem Reap is located at the city’s most prestigious address within walking distance to the high quality selections of bar, restaurant and boutique shop. It comprises 104 rooms in an elegant, contemporary and residential facade. Stay at one of the best Siem Reap luxury hotels near Angkor. Its suites are the finest in the city with distinctive attributes such as private garden and/or swimming pool, separate living area, extensive bedroom and equally spacious bathroom. Balancing high standards of comfort and personalized service with an excellent location, the brand new luxury J7 Hotel uniquely fuses a modern and luxurious environment for guests complemented by a full range of modern amenities. All 90 rooms lavishly featured with large en-suite bathrooms and bathtubs and you have the option to choose a smoking or non-smoking room to cater for your comfort. It also offers a range of facilities including meeting spaces, gymnasium with sauna and steam rooms, and outdoor swimming pool with 5 Jacuzzis located at the swimming pool, all-day dining experience and fantastic Moringa Wellness Spa for your unwinding pleasure 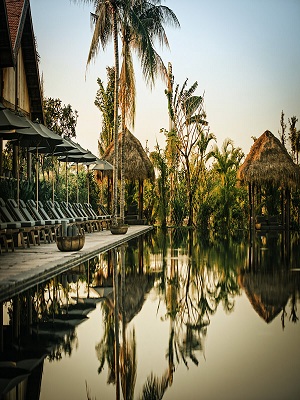 Phum Baitang or the green village is a 5-star luxury resort near Siem Reap in Cambodia. Set within 8 acres of lush gardens, lemon-grass meadows and rice paddies, this elegant retreat is a gateway to the Angkor World Heritage Site and numerous natural and cultural wonders. 45 spacious stilted villas − 25 with private terrace and 20 with private plunge pool − comprise the guest accommodations. Inspired by traditional Cambodian wooden housing, both exterior and interior have been designed, sculpted and furnished to create an authentic yet luxurious Cambodian experience. 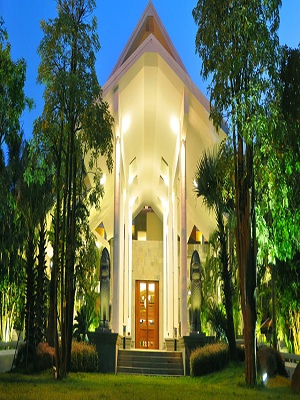 THE PRIVILEGE FLOOR BY BOREI ANGKOR

The Privilege Floor by Borei Angkor is the most luxurious hotel in Siem Reap and can be found at Borei Angkor Resort & Spa up on the top floors. The resort is not far from Siem Reap International Airport, just 15 minutes drive in vehicle and you’re there. The décor of the property represents the rich and highly unique culture of Cambodia, which permeates the entire atmosphere of the property. Guests can also take a 15-minute drive to reach the Temple of Angkor Wat and for a night on the town, Siem Reap ‘s local pub street is just 5 minutes away. Sofitel Phnom Penh Phokeethra is set riverside amongst landscaped gardens in the old quarter of the city. This stunning well located 12 storey colonial style hotel is close to key attractions, embassies and the central business district. Along with 201 luxurious rooms and suites with Mekong or Bassac river views, this beautiful hotel offers an array of chic restaurants and bars, an upscale spa, two swimming pools, a sports club and the finest conferencing facilities in Cambodia.

A luxury hotel fit for Royalty. Raffles Hotel Le Royal has, for nearly a century, been the premier hotel in Phnom Penh, blessed with history and style, atmosphere and aesthetics. First established in 1929, it welcomes as it has always done a diverse international clientele of entrepreneurs, writers, journalists, royalty and intrepid travelers of all stripes. Graced through the years by legends including former U.S First Lady Jacqueline Kennedy and French writer, statesman and adventurer André Malraux, Raffles Phnom Penh sets the benchmark for refined enchantment and divine relaxation. In north-western Cambodia, on the outskirts of the world renowned millennium aged temple ruins of Angkor, lies the quaint and quiet town of Siem Reap and the heart of Khmer culture. Offering discerning travellers an ideal location from which to explore the plethora of ancient wonders and key local attractions, our luxury hotel in Siem Reap Exuding the charming tranquillity of a grand Khmer style villa, each of the 39 suites within Anantara Angkor are gloriously appointed with your complete comfort in mind, seamlessly melding sophisticated Khmer design elements with contemporary style and a host of modern comforts. Perched on the idyllic setting of Tonle Sap River, banks of the Chaktomuk River, be immersed by the essence of serenity at Himawari Hotel Apartments; a five-star establishment. Be pampered in the Himawari Suites and Apartments where you can enjoy the privacy and comfort of home. Himawari Hotel Apartments was first launched as Micasa Hotel Apartments on 20 June 2001 by His Excellency Samdech HUN SEN, Prime Minister of The Royal Government of Cambodia. In Japanese, its means Sunflower and here at the Himawari, we always seek to project our cheerfulness, friendliness and the serenity likened to a bed of sunflowers blooming under the glorious sunlight.